Luke Dorny on or about March 26th, 2020 around Bainbridge Island, USA despite their best efforts to fail.

Hop on the bus.

In early 2009 (May 28th), and after much communication with Chris Iwanowski, the busman up in Ontario about what I wanted in a bus, I found a bus for sale down the street from me in Long Beach that was what I wanted. Oh, happy day!

The 1971 bus itself was all original and sat in a backyard shed for a long time (he said decades) in California before a neighbor found it. Then that neighbor redid the brakes using New Old Stock brake kits. Then I bought it.

Why a bus? Well, that’s a great question.

In 1995 my first car was a 1960 VW Bus bought from a friend. It was a lot of fun, but it was clunky, old, rickity, slow, somewhat rusty, and the one time I didn’t change my own oil, the mechanic left the oil cap off and as I drove home, all of my dreams went up in smoke on the freeway. Lots of great memories in that bus, though. We drove to Las Vegas in that thing, and it was, …eventful.

After that bus, I planned to never have to change a failing accelerator cable while on a date on an overpass of the freeway again. Great story but a few weeks after that, my girlfriend and I went our separate ways.

This bus is mostly a memory of my youth, when we used to secretly lob water balloons out of dad’s bus sunroof at nothing in particular, until we got busted. And the kids love it. It’s a lot less complicated to work on than newer cars, too.

Why? Because it’s fun. There’s no peace and flowers reasoning behind it. Okay, back to it.

Spent some time and money shortly after purchasing it to have a custom 1776cc motor built up for her. I spent a little extra on the balanced flywheel/crankshaft/cylinders, the custom camshaft, the dual port heads and dual Kadron carburetors. The carburetors were tricky to tune. But I was getting 70mph on the freeway no big deal:

The local shop in Long Beach was wonderful, as was the machinist who crafted the engine. ## Horn Well, the horn technically worked, but it was weak. So I picked up a compressed-air train horn and had it installed under the floorboards with a special horn button. We tested the horn with the shop compressor and nearly blew ourselves out the door! It should have been installed with a pull chain, now that I think about it, but that could still be done!

The gearbox was sent to a shop nearby to remanufacture the linkages and gear syncros, as well as some fresh paint.

## Paint I stripped some of the windshield and rubber seals around the doors to prep for the paint. Weeks later the bus was painted in Los Angeles. The bus had to be covered in Long Beach still, though, because I needed to reinstall the sunroof for it to be truly weatherproof. That meant driving it into the backyard under the lanai every time I drove around.

Finally the windshield was refitted and it was ready to be moved up to the Pacific Northwet.

The tires were swapped out for some medium sized bias-ply white walls and that actually made the bus sit a little bit taller. Not ideal, and driving around Long Beach had the tires squeeling on the hot asphalt. Remember all of those old movies with tires squeeling? Yep, it’s a thing. They squeeled all the time, and slid, too. Long Beach Drift.

That setup didn’t last long, though, once the bus was painted and shipped to Seattle, I hunted down some straight replacement wheels and had them sandblasted and powder coated in Ballard. White, to match the upper color on the new paint. Then I put proper tires on with truck sidewalls to spec. ## Interior We set to stripping out the black vinylboard interior and replacing it with some Baltic Birch panels, Westfalia style. Four coats of shellac seems to have worked well.

The ceiling birch panels will still take a bit of work to properly finish. The shapes are pretty crazy and they contour along the curved press roof. And it has to allow for the sunroof, and the sunroof controls.

Yes, this bus came with a full-size sliding steel roof. Full size, in this case, means it spans roughly a third of the bus length.

Ah, driving Sandy is a dream.

Sandy was born the same year as I. She’s not finished ten years on. Nor will she ever be. But she’s parked right outside ready to roll.

Then, thanks to good friends, and shortly after getting most of the bus together, we managed to get it on the cover of the local magazine:

A short while ago the odometer flipped. At least 100,000 miles on this baby.

Chris Iwanowski, the busman, is no longer with us. Sadly, we lost him a few weeks before I picked up the bus. I was anxious to share the good news with him, but his complications worsened and we weren’t able to celebrate together. 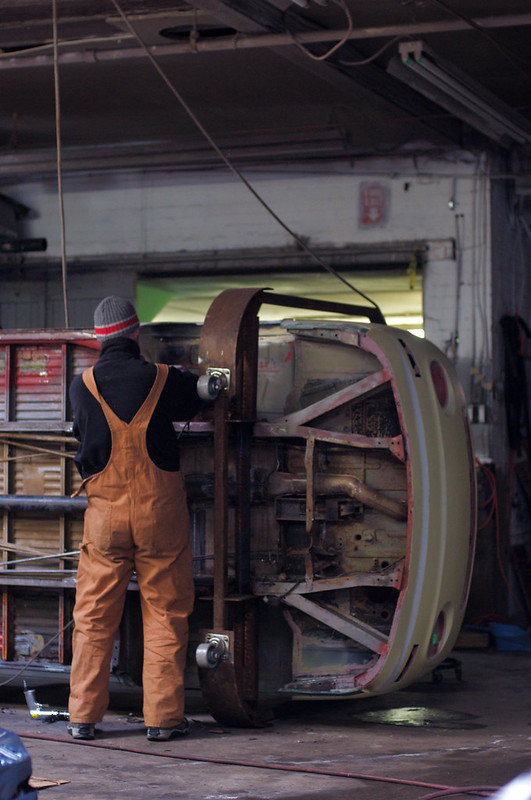 So, I dedicate this post to his memory. He was a wonderful family man, agency owner — Barking Dog Studios, community-involved businessman, bus driver — Flickr, and overall fantastic human being who drove his bus across Canada.

Thank you for your friendship and kindness, Chris Iwanowski.