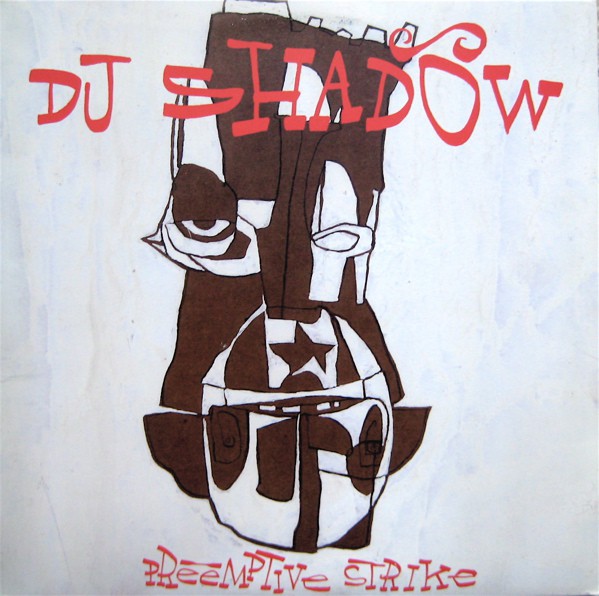 Oh, my goodness. This record was a aural breakthrough for my ears.

I originally picked this up on CD late in the 1990s. It was so groundbreaking that I later found a double-vinyl version.

Which reminds me that I would love to read an article about the permanance and corruption of musical storage mediums, with graphs on the pros and cons of each format. I'd donated my entire CD collection in 2016 in a weak moment of weakness. I think about all of the hours I've spent over the last three decades collecting the music I love. What discs were in those boxes? Too late to know, now!

I enjoy the artwork and lettering on this sleeve, and I'm reminded how satisfying it is to get physical artwork along with the audio artwork when buying a record. Artwork that catches your eye while browsing physical sleeves in long racks, with letter dividers, genre labels, and discount bins.

Contemporary American painter and installation artist with roots in the graffiti movement. He was born in 1973 in Jamestown, NY, he is a self-taught artist who uses a variety of mediums, including ink, spray paint, oils, and gouache.

He had a book published about his work in 2008, and I found one available on eBay, so they are out there, if you're into it. Oh, and text is by Pushead.

Part of a whole gang of street artists--from Barry McGee to Swoon--who have broken into the art world in the last decade or so, Phil Frost's signature style is a funky tribalism--Hawaii by way of New York City--infused with a quirky sense of art history and design. In the 1990s, Frost honed his skills by painting walls, found objects and street detritus with his intricate, compulsive and highly evolved form of tagging. Frost's gallery exhibitions are crowded affairs, filled with wildly patterned totemic objects and baseball bats while the walls are stacked with colorful mixed media paintings. He crafts his painstaking paintings by collaging layers of found imagery on grounds of symmetrical black-and-white patterning, which he paints with correction fluid, and that often morph into language-like glyphs or symbols. Frost states, "I believe [my work] is indigenous to myself. I believe that within every person there is an indigenous expression of themselves." Including an essay by New York journalist Carlo McCormick and notorious lowbrow artist Pusshead, this is Frost's first monograph, and an invaluable introduction to the evolution of his style."

This tracklisting has tracks not available on the vinyl version:

Liner notes printed in the gatefold sleeve:
"All songs contained on this album are previously released by Mo Wax in England. Until now, the only way to hear them was by obtaining import copies. I wanted to make them available to those who enjoyed ''Endtroducing....." while I still had some control over their presentation consume at leisure and then decamp... before sample laws catch up with us." Followed by thanks.
This record is dedicated to the memory of Paul Ballenger.

(Notes from the Discogs release page)