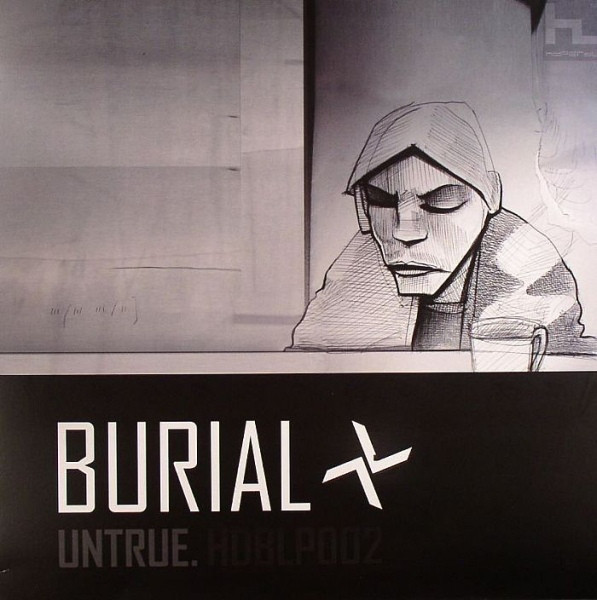 Finally picked up this album and his other release "self-titled" on vinyl, which were both (nearly) released in 2007. I've also seen the first one marked as a 2006 release.

This version was briefly available from bandcamp sold out fast in 2020. It has added in the smaller atmospheric tracks that were included on the CD release making the experience of listening to this version more complete:
https://burial.bandcamp.com/album/untrue

Yes. Dark? Yes. Moody? Yes. Otherworldly at times, yet still warm and enjoyable.
Still, they're some of the moodiest albums I have.

I am far from a 'true fan' as that goes regarding Burial, but I did find out there was some to-do around his identity ”Will Bevan, from South London” -Vice.com.

Photos were created by Georgina Cook, who did work with HyperDub, XLR8R, The Guardian, The Village Voice, and more, and is well know around the UK for her blogging of musical events.

I have found no details around the artwork on the cover and there were no words describing the project. If you find any details, …please let me know.

Burial's now classic album on 180g double vinyl - features a free and unique download code, black inner sleeves and in a thicker card sleeve. It is updated to add the beatless atmospheric tracks that have always been integral parts of the complete CD versions. The 1st 50 copies bought from http://burial.bandcamp.com/ included album at screen print.

Track listing taken from sleeve other than A1 which is totally blank but refered to as 'Untitled' on Burials site.

(Notes are from the Discogs entry)

https://www.discogs.com/Burial-Untrue/release/8312002 Search for "Untrue" by Burial